skip to main | skip to sidebar

Our first day in Amman, Jordan

The flight was excruciating – 3 hours to JKK in NY then a several mile walk to the terminal (in 3” wedge heels!) that ‘appeared’ to be right by our landing flight based on the print out. When we boarded we expected a full plane – instead it was ¾ empty! This made it extremely handy when it came time to go to sleep! I located a 4 seat section – raised all of the arm rests and created my very own bed! I slept for 8 hours – fortunately. I was woken up by my husband letting me know we had one hour to go before landing. I asked for another 30 minutes rest so I could get acclimated to where I was and what was going on.

On the ground we entered into the Amman airport. A very quaint airport – larger than Anniston, Al. but smaller than Birmingham, Al. airport. This was a big relief because we did not know what our Jordanian cohort looked like! After walking around for several minutes, we thought we’d been stood up. I said a prayer under my breath and the next thing we heard was, “Mr Jim?, Ms Tammy?” and there he was - a well kempt Arabic gentleman with kind eyes and his assistant. They helped us outside with our baggage and away we went to the Regency Palace Hotel in downtown Amman. I have to say, this hotel is a class act! I’m very glad we stayed here and we would stay here again!

We took a several hour nap to over come the jet lag then we met for dinner. I had a fun encounter before our meal. We went into down town and our guide needed cigarettes. We walked a few blocks to a local store. While he crossed the street his assistant took us into a local outdoor food court to show us a vendor making falafels from scratch. The man was an Egyptian. Very interesting and quite quick with making his product. Next thing I know he’s gesturing for me to come and make one! I ran up to the cooking stage and made my very first falafel! It was a hoot! They were all so friendly, kind and courteous. What a wonderful memory! 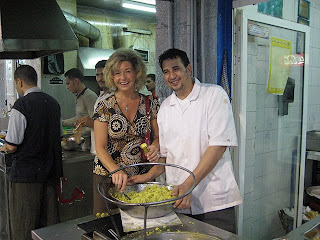 Tammy making a Falafal
Then we went to a local restaurant named – Jerusalem Restaurant. We were served our meal 20 minutes before we could eat it. 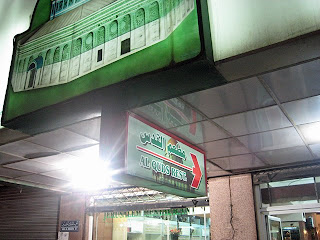 Entrance to "Jerusalem" Restaurant
We’ve arrived during the month of Ramadan. The entire country fasts from everything – food, liquids, bad habits, etc. until 7:00pm every day. The meal we ordered is called,‘Mnsf’ translated it means – explosion or “The Bomb”! And that’s what the table looked like – like it had exploded or been bombed with food! We had it all – stewed lamb on a bed of saffron rice, a side sauce make of finely and meticulously heated yogurt (very smooth and creamy not lumpy and bumpy like yogurt usually becomes when heated). We had spicy olives, hummus, pureed eggplant sauce, a chunky garbanzo bean salad, a yogurt, cucumber & tomato salad, pita bread (which by the way is WONDERFUL over here & in Israel as well!), freshly squeezed Mango or Lemon juice (we got the Mango – it was divine!) and a chicken broth & herb Ramen soup. Like the name means – The Bomb! And man was it ever! We loved the entire experience – with the exception of the smoking allowed in the restaurant. Smoking is extremely prevalent over here – it makes me thankful for the non smoking areas at home for sure! J

After dinner we walked down town with our guides and viewed an ancient Roman Amphitheater – it seats around 5000 people. As we were walking around we had a local street vendor come up with large pot of hot tea and fresh mint. The men all purchased some. I tried a sip of my DH’s – it was very good. I was strolling around looking at the ruins and then next thing I know this adorable little boy ran up to me with a piece of candy. He had the most beautiful eyes – they were like giant chocolate drops! I instantly fell in love with him. His name was David. I met the mother, father, younger sister and older brother. They were so kind and friendly. We wished them good luck and best wishes and walked over to an outdoor after dinner smoking/coffee café. One of our guides ordered a smoke – it was a 4” water pipe/bong that contained a blended fruit & herb type tobacco. It smelled incredible! It made me want to smoke again! (Don’t worry – I’m not going there again! I’ve been smoke free for 15 years now! PTL!) We all had Turkish coffee and discussed our company’s future needs and growth desires. 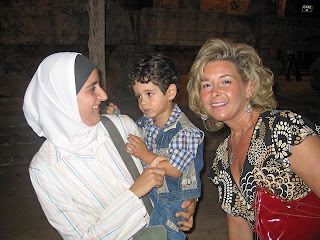 Tammy with David
While we were talking I saw a small child coming near our table. It was David! He was holding out an envelope and walking to me with it. The father came up and let us know they had purchased post cards with the highlights of Jordan on them! The envelope read, “From David and Famey (obviously they meant family) with my best wishis (wishes) for you. Thank you.” I was soooo touched! I profusely thanked them and opened the envelope. We looked at the pictures and put them back in the envelope. It was dark outside, and we didn’t notice until later in the hotel that they had written something on the back of each post card! About 15 minutes after he brought me the envelope little David with the chocolate drop eyes showed up again to give me a kiss good night. How awesome is that! Definitely worth dealing with jet lag! J

We arrived back at the hotel in time for our 10:00pm appointment with the owner of an existing Dead Sea company here in Amman. He brought us product samples. I had requested raw, unfinished Dead Sea mud. He handed me the jar and I immediately knew without opening the container it was a finished product with fillers and perfumed fragrance. I even said it out loud before I opened the bottle. And I was correct! I asked numerous questions to find out that I know more about the Dead Sea than anyone here in Jordan knows, too!

Our guide told me I am actually more advanced with my products than anyone in Israel or Jordan. He called me a true pioneer of Dead Sea products. He said that we are doing things with the Dead Sea that they thought were impossible! How about that!? What a tremendous compliment! BTW, our guide has worked with the Dead Sea products and raw ingredients for 11 years now. That was the biggest compliment I could ever receive!

Glad all is well! Looking forward to reading more about your trip!
Debbie

Wow Tammy,
What a privilege to enjoy the trip along with you and your husband. I love the details. David is a doll and made me think of King David who may have looked much like him as a boy. //Kay Rose